As realized losses diminish on-chain, the structure of the bitcoin (BTC) market indicates that a defining pivot point is being tested. The profitability of spending favors a medium-term bullish scenario, although recent short-term selling indicates that moderate distrust remains. On-chain analysis of the situation.

Bitcoin (BTC) price is moving higher, testing the $24k level which has already been rejected twice in July.

While many participants announce the return of a prolonged increase, the context on the chain indicates that the market is reaching a decisive tipping point.

This week, in order to assess the possibility of a bullish recovery given the likelihood that the downtrend will continue, we will analyze:

👉 Find all the thoughts and in-depth analyzes of Prof. Channel on our Discord Channel (Le Grille Pain) accompanied by other experts like Vincent Ganne!

The conditions for a takeover

After entering a new bearish regime at the end of 2021, the BTC market has since recorded a sharp fall in profits (in green) and an increase in losses (in red) performed on the chain.

In addition, net profits/losses, in blue, were strongly negative during the second quarter of 2022, allowing the realization of historically strong nominal losses in May and June.

However, this dynamic seems to be fading, while realized profits and losses are returned to equilibrium during the first week of August.

The recent neutral zone test, where losses equal profitsindicates that the market is near a pivot point that should be highlighted. 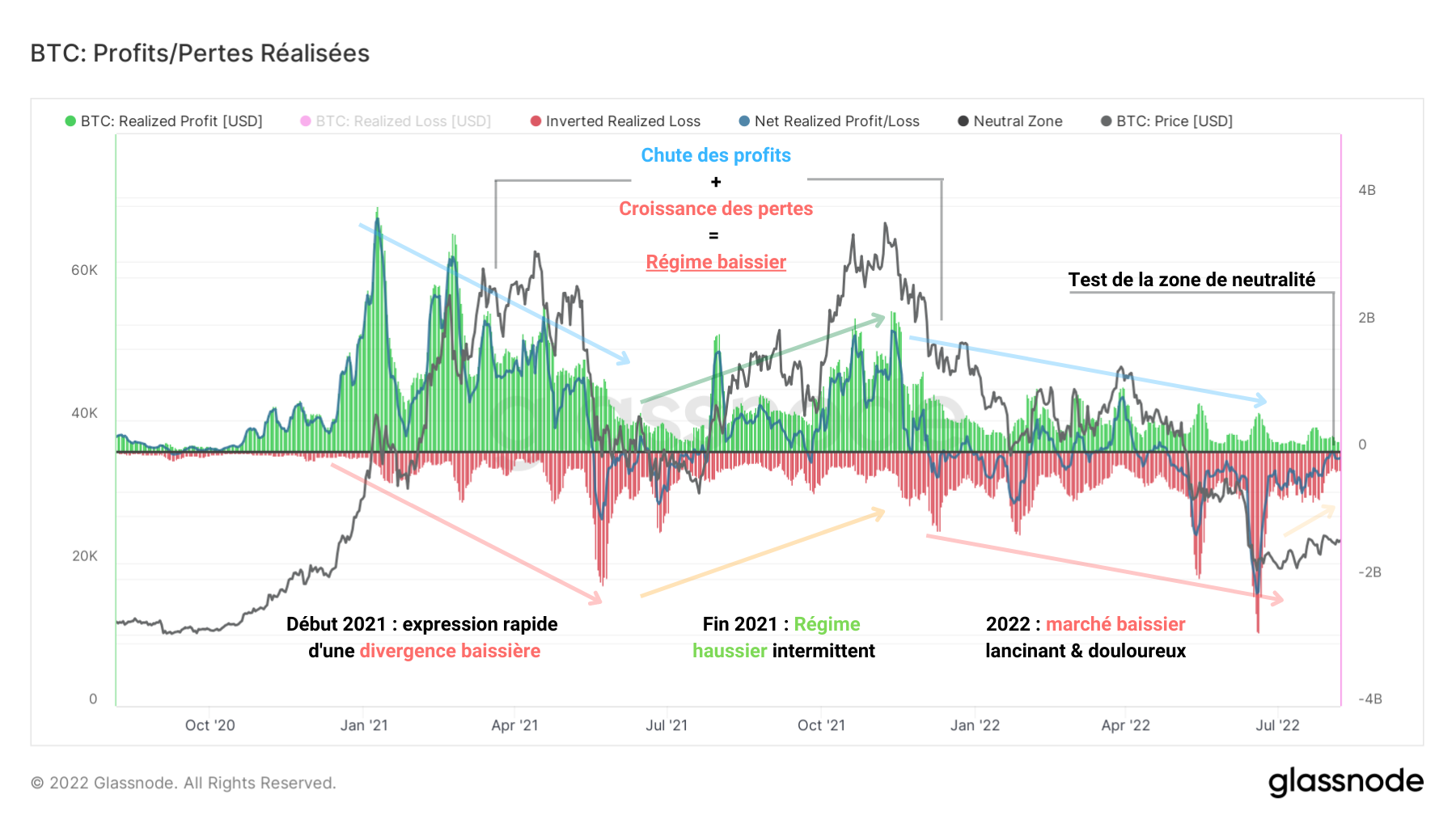 While the net profit/loss mentioned above represents the difference between realized profits and losses, the following graph makes it a ratio.

This oscillator allows highlight positive and negative periods of profitability depending on market dynamics.

Here too, a test of the neutral zone (profits = losses) has been recorded. The fact that this threshold acted as a resistance indicates two things: 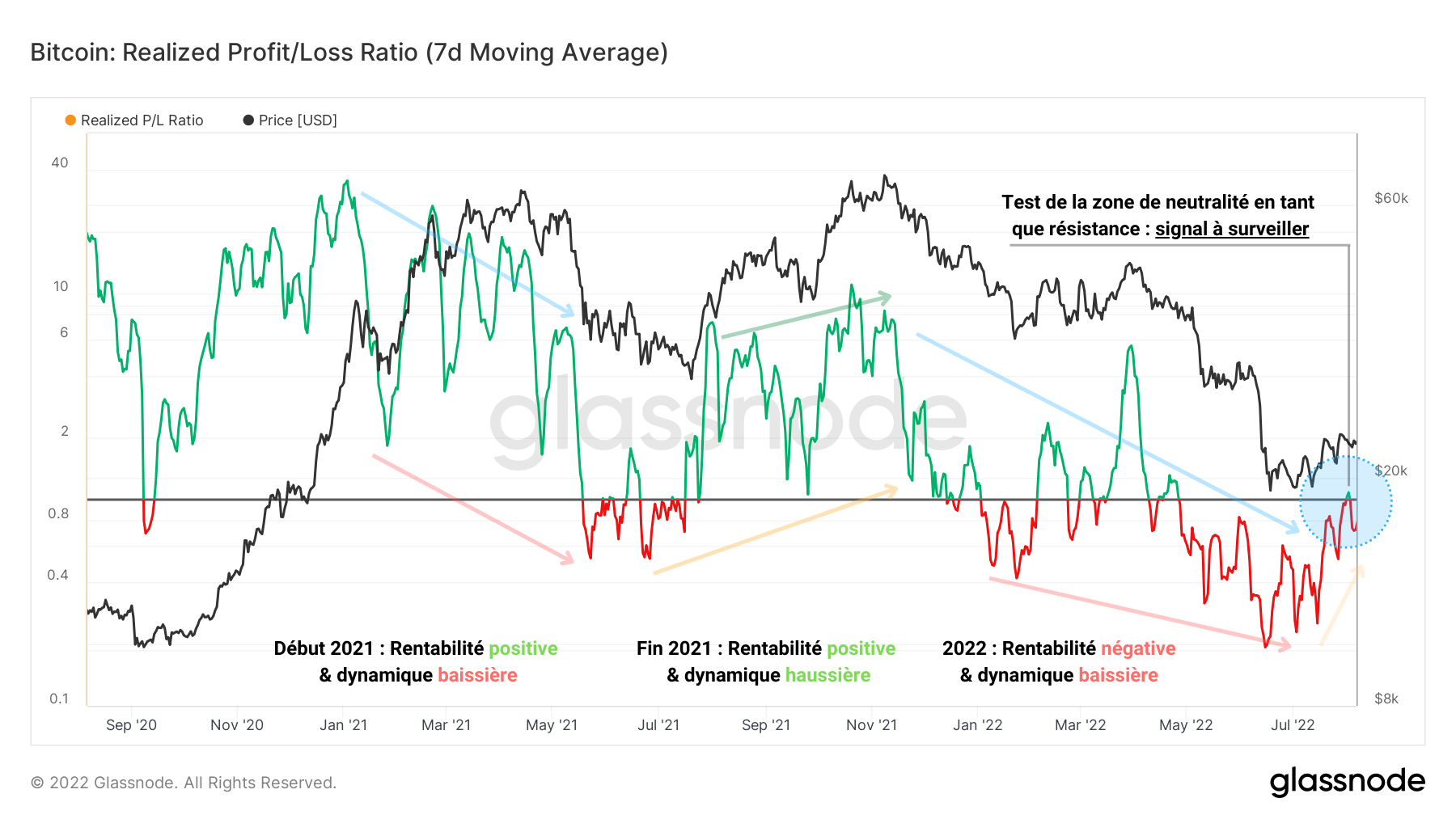 As evidenced by the aSOPR, mentioned last week within the Grille-Pain, the neutral zone currently serves as resistance to the dynamics of market profitabilityalthough realized losses have been falling since June.

Although the downtrend still prevails, the fact that the market has recovered – if only for a few hours – such a point of equilibrium indicates that a recovery situation is underwayand the end of the bear market sets in over the months.

One of the signals to watch is therefore the confluence of these indicators, indicating a return to profitability, allowing investors to sell their coins to newcomers during a medium to long-term rise. 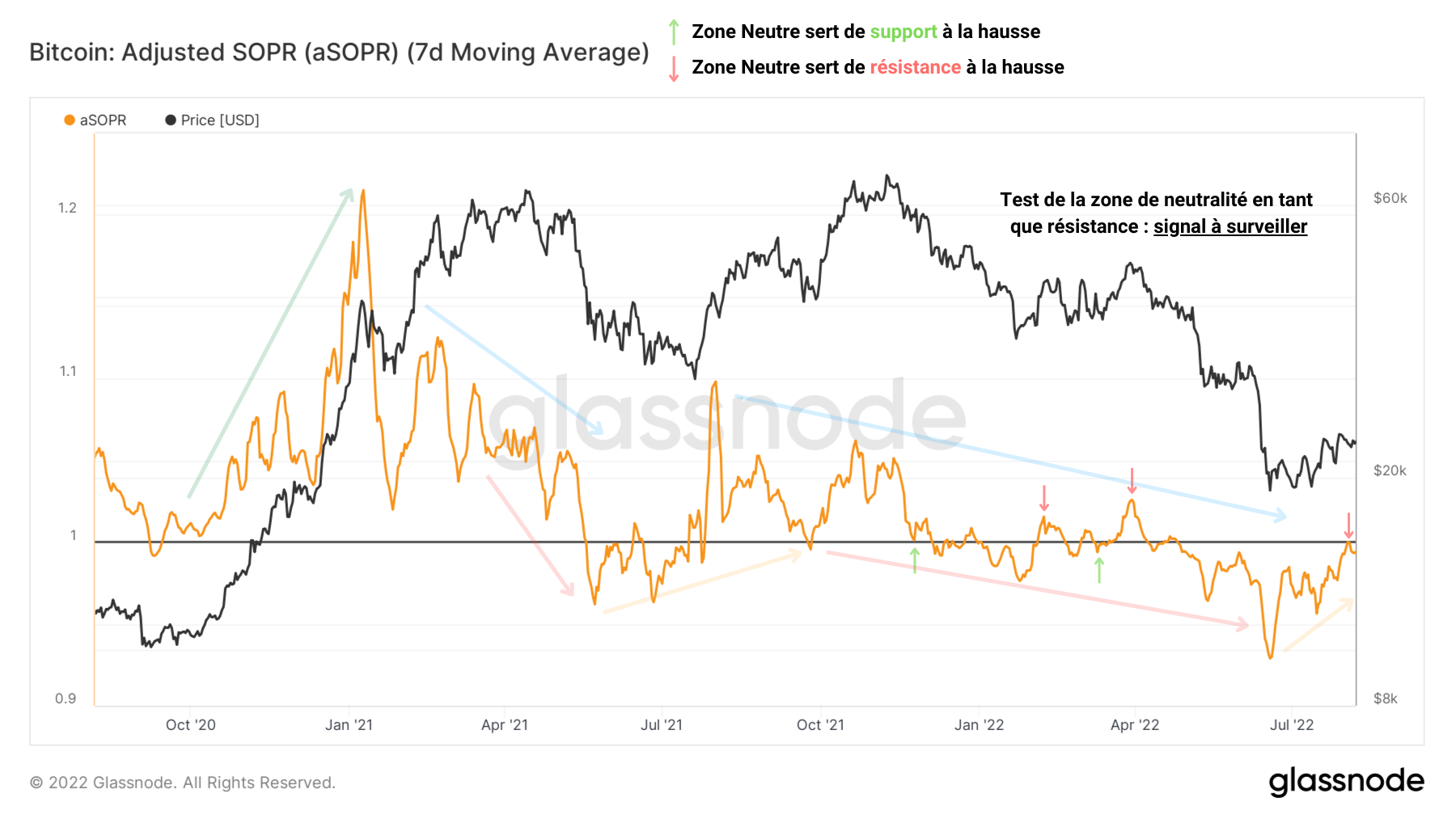 That said, this dynamic seems to be settling in step by step in the short term : the STH-SOPR, representing the cost-benefit ratio of coins less than 155 days old, seems to be stabilizing close to its neutral zone.

We can currently observe an oscillation of this indicator around the value STH-SOPR = 1, a sign that the expenses of short-term participants are close to their cost base.

To date, this neutral zone still manages to hold the ratio down, serving as resistance, although the value range is tightening.

The profitability of spending over the next few weeks will therefore be of paramount importance. to determine the medium-term profitability dynamics of the market. 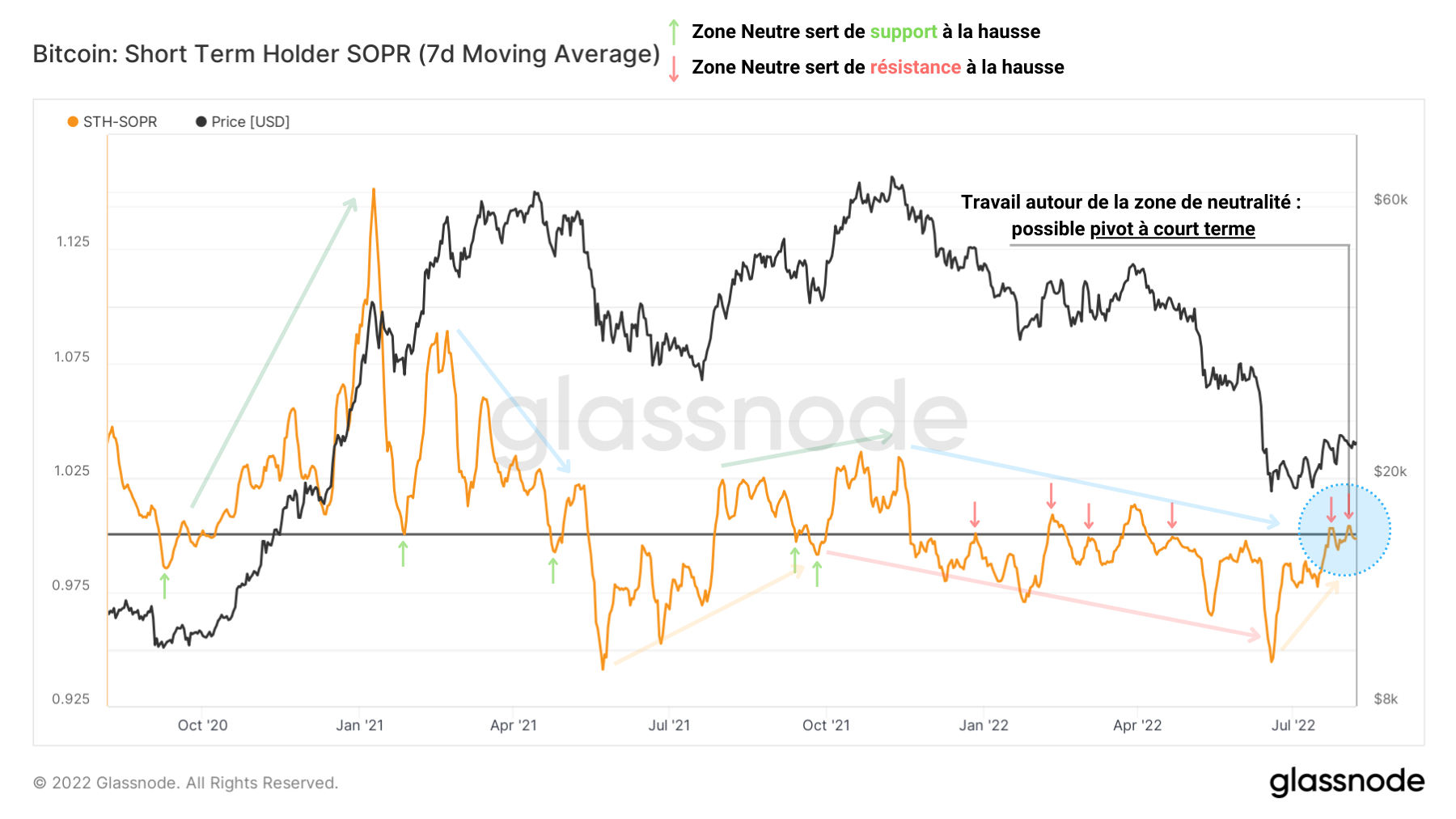 The exchange that has the wind in its sails⭐

5% off your fees with this button

Studying the supply held by short-term and long-term investors allows us to observe the behavior of these cohorts in response to the current price action.

What emerges from the recent evolution of the supply of LTHs is that, following the three phases of expenditure that have occurred since May 2022, it is currently experiencing slight growthdue to the maturation of the parts.

It means that UTXOs crossing the 155-day threshold accumulate faster than LTH spend.

Thus, this increase indicates thata volume of coins was bought between February and March, then HODLed until todayadding to the argument that long-term investors have not “capitulated” in the true sense of the word during this bear market. 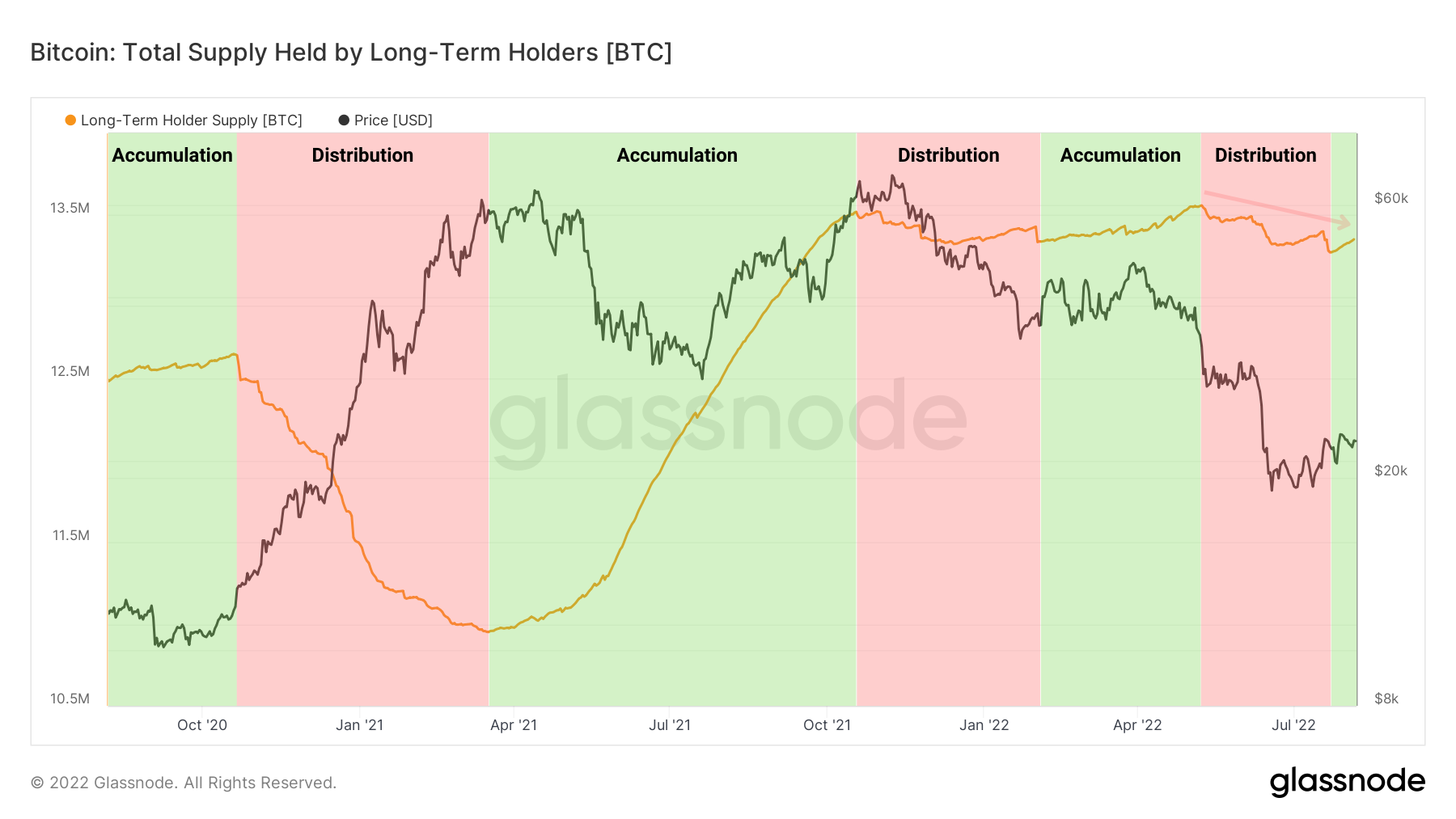 Regarding the supply held by short-term investors, it seems that STHs took advantage of the brief return to profitability allowed by the recent price increase to proceed with modest expenses.

Indeed, although showing an overall accumulation behavior since the month of June, part of the STH cohort sold the recent rise, as evidenced by the two slight retracements of the metric below.

The fact that these players are selling close to their cost base as the price recovers signals thatpart of the cohort is still affected by the events of strong downward volatility in May and June and is taking every opportunity to exit the market by limiting the broken pots.

This behavior of mistrust is not particularly appropriate for a price recovery and mitigates the overall finding, adding a degree of uncertainty in the short term. 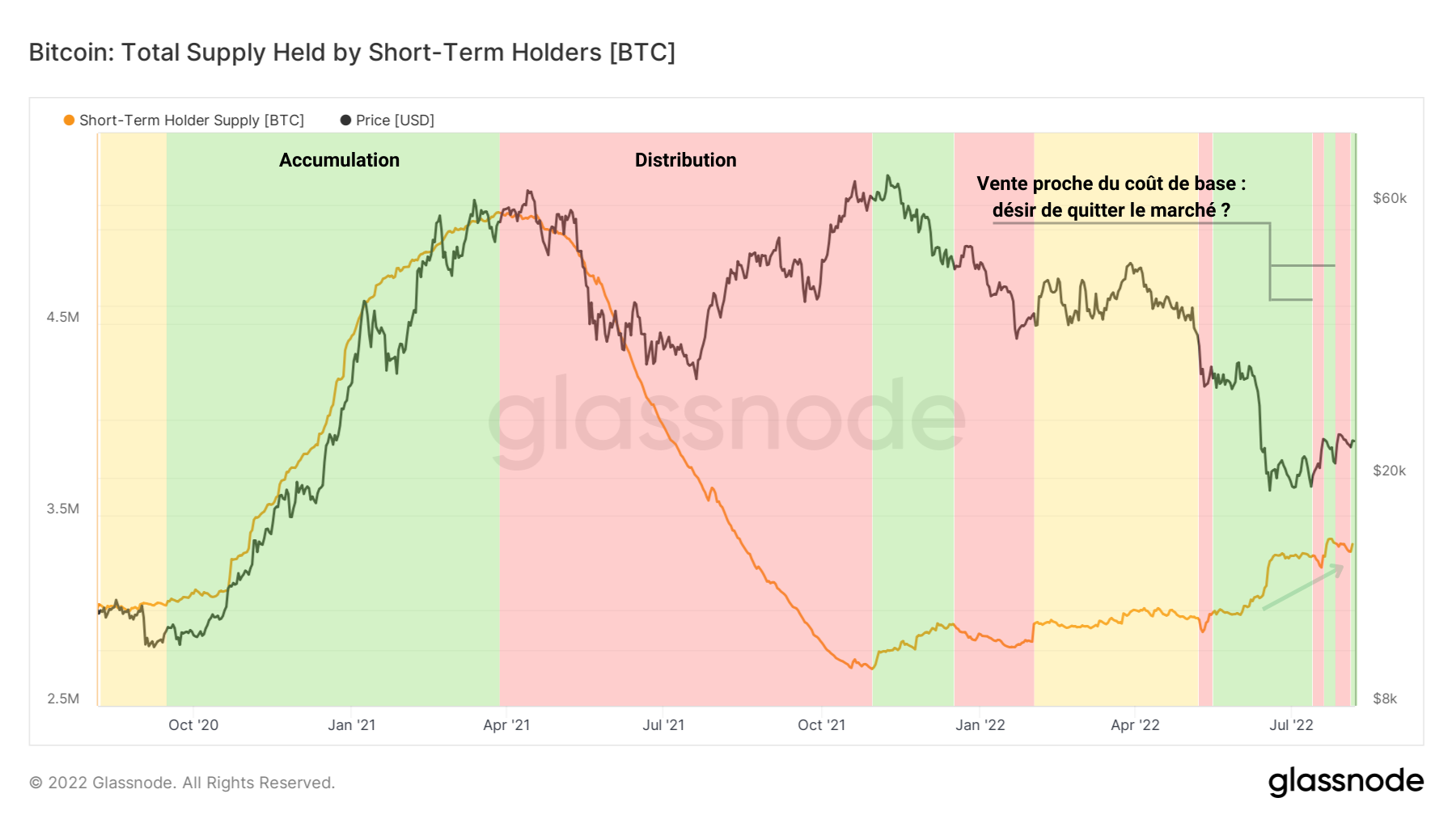 👉 Find out how to buy bitcoins

Buy and make your cryptos work

Summary of this onchain analysis

In short, the data of this week indicate that, from the point of view of profitability of expenditure, the market is close to a decisive pivot point which could pave the way for a rise in the medium term.

Conditions for a trend reversal are gradually developing as the selling pressure on the channel has been decreasing for the past few weeks.

Finally, although HODL coins since Q1 begin to pass 155-day threshold, short-term supply shows mixed wariness that could stem a trend swing expected by many participants.

Access the complete analysis of Prof. Channel via our private group: The toaster

Get a crypto news recap every Sunday 👌 And that’s it.

The content on our website is for informational purposes only. The information on this page does not constitute investment advice or a recommendation to buy or sell. You should always do your own research and we advise you to seek outside financial advice.

My goal is to inform everyone about the state of Bitcoin (as an asset and a distributed network) through the prism of on-chain analysis.